Brief History of the Names : 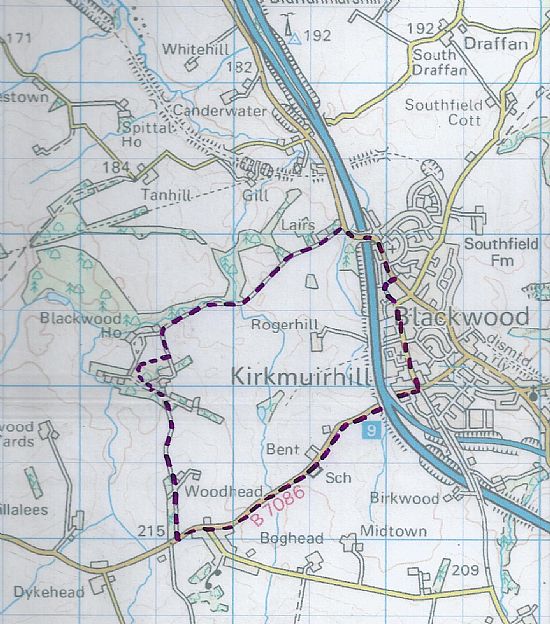 Map showing the villages and the popular walk through Blackwood Estate

Blackwood (village) takes its name from Blackwood Estate, owned since the 13th century by the de Vere family (hence the name Vere Road). The mansion house stood at the top of the estate driveway and was demolished in the 1930s. Robert Burns’ sister was married to the estate factor there. The village developed as a result of the railway being built in the second half of the 19th century.

Kirkmuirhill is the older of the two villages by far and is first noted in the records in the year 1666. It was latterly closely connected to the local mining industry, but probably developed originally as a staging post on the old Glasgow to Carlisle road, at the cross roads with the road from Lanark to the west.

As there was no church in the village prior to 1868, one theory about the origin of the name relates to the upper muir lands of the Kerse, Kerss or Kirse (Kerse House still stands lower down, near the Nethan), through which the old Carlisle road used to pass. The village of Kirkmuirhill stands about half way up the hill (on the old Carlisle Road) that ran towards these lands and a farm called Muirsland still exists at the top of that hill.

Although the two villages still have their separate names and identities, the border between them has shrunk almost into obscurity. In modern times, Blackwood has increased significantly with the advent of large housing estates, thus further diluting the identity of the original villages.

For information about all the Place Names in the old Parish of Lesmahagow, click on this link to the website of the National Library of Scotland:

The facilities managed by the Thornton Road Community Centre Association are available for use by people in the whole area, regardless of where they came from originally or which part of the area they live in now.

BENEFACTORSCommunity Award.BREAKING NEWS! TRCCA Purchase the Centre for the Benefit of the Local Community!!!COMMUNITY-MINDED AND LOOKING FOR A GREAT TEAM TO JOIN? - CLICK HERE!
BENEFACTORS
South Lanarkshire CouncilProvided funding which we have applied to the rent over the years, and for part-funding of the purchase of the Centre - 2018.
Scottish Gas NetworkFor Weeding the garden, laying the block path and painting the fences.
Second Chance For agreeing, in principle at this stage, to fund IT equipment for Skype/Facetime tuition for older people.
Patersons Quarries LtdProvided funding via Land Trust for major refurbishment of Centre - 2014.
Land TrustAdministered funding from Patersons Quarries - 2014.
Develping Local Communities FundProvided funding for Xbox equipment for the Youth Clubs
CemexRe-laid driveway with block paving and stones.
Bord na GaidligFor funding to allow TRCCA to run Gaelic classes for Beginners - Sept to Dec 2019
Auchrobert Wind Farm (Falck Renewables)For match-funding the purchase of the Community Centre and Exercise Classes for older people, and for providing us with efficient recycling bin banks.
Auchrobert Wind Farm is helping to breathe new life into the local community by way of its Community Fund, for the benefit of all. 2017/8
Lesmahagow Development TrustFor funding a wall-mounted, remote-controlled projector screen - 2017.
Robertson Trust
Scottish Land Fund
Tesco Bags
sitemap | cookie policy | privacy policy | accessibility statement